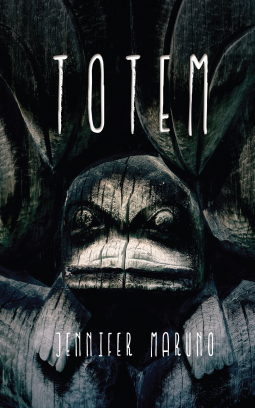 Totem, by Jennifer Maruno, follows a young boy as he runs away from one of Canada's residential boarding schools for First Nations or Aboriginal children.

Jonny Joe has been living at Redemption Residential school for as long as he can remember. Despite how long he's been there Jonny doesn't really fit in, it's a native school and he's the only white boy. When summer break comes along all the other boys get sent home to be with their families, except for Jonny, being an orphan he spends his summers right there at Redemption Residential.

This year turns out to be different when a boy gets hauled to the school by the Indian Agent. Apparently Ernie's family had been taking him out on long fishing trips each year when the Indian Agent came around to take the kids away to the school. So as punishment Ernie will have to spend the summer at Redemption Residential.

Ernie is set on trying to escape and enlists Jonny's help. At first Jonny, having never lived anywhere else, doesn't want to run away. But when one of the new priests, Father Gregory, starts taking a rather personal interest in Jonny, Ernie convinces him that he needs to leave too.

The night that they escape a huge storm comes through that leaves the boys stuck in a secret cave. While they're looking at the drawings on the cave, lightning strikes right out side and both boys are knocked out. When they wake up they are in a different time, back before white people had settled in the land. An old man, who seems to know why they are there and where they came from, takes the boys to the village.

They spend close to a year living in the village and learning about their past. Eventually a ship carrying, priests, nuns, adventurers, and a photographer arrive. Though they are friendly they bring with them a disease that wipes out most of the village. Jonny and Ernie run back to the cave to warn the old man not to come to the village when another huge storm comes up and they are zapped back to the present.

Upon coming back to the town they realize that they've only been gone for one night. Not to mention, lightning had struck Redemption Residential and burned it to the ground. Jonny decides to stay with a local farmer and put the skills he learned to use. He carves a totem to mark the grave site of the village from long ago.

This book was both fascinating and intense. When Father Gregory takes Jonny into the basement to help him, I kept thinking "run man run!". There's a lot of history in this book, from the Residential schools that tortured and abused many of the First Nations people to the tribes that were wiped out by disease. Jennifer Maruno did a great job of making a history lesson into a gripping story of a boy connecting with his roots.

I received a digital copy of this book through NetGalley and Dundurn in exchange for an honest review.
Posted by Emily Pearce at 2:59 PM No comments: