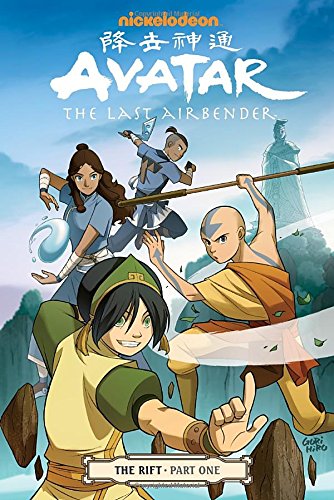 In this sequel to the hit Nickelodeon series we get to see where Aang and his friends have been up to. During the story the crew heads to an island to celebrate an airbender holiday with Aang's new disciples. Unfortunately the island has become the site of a major mining operation that threatens to destroy the island.

This story is geared towards fans of the television series and most newcomers will have a difficult time understanding the group dynamics. However, for someone who has seen the entire series, this was an interesting look at where the characters are now.

I was a little disappointed that the story wasn't longer as I wanted to learn more about their new world but all in all it wasn't bad. The authors managed to keep the characters personalities intact through their dialogue and views on the mining operation. The artwork is also consistent with images fans will remember from the Nickelodeon series.

I received a digital copy of this book from NetGalley and Dark Horse Publishing in exchange for and honest review.

This comic book came out on March 18th, 2014 and is available on Amazon in both Kindle and paperback.

Posted by Emily Pearce at 12:34 PM No comments: So I've been reading this book, "E squared" by Pam Grout, about how there is this force out there that we just have to tap into to change our lives and the world. It contains nine experiments to prove that this field exists. The first one is simply suspending ones disbelief and saying (and I'm paraphrasing here) "Hey, field. I need some proof that you exist. Not just a nudge or something I can pass off as coincidence but some real proof. And hey, you've got 48 hours starting now." then you go about really looking for signs during that time frame. Simple enough.

At any rate I gave it a shot, starting at 08:48 A.M. on Oct 5 and ending at 08:48 A.M. on Oct 7, and here are my results. About 15 hours later a gal I work with pulled up in front of my truck, jumped out and gave me a chocolate bar, not a Hershey's bar (which, by the way, I'm not a huge fan of) but a 70% dark chocolate bar with chili's and a bit of orange. Something I never would have bought for my self because I have a hard time paying more than a buck for something I'm not sure I will like. But it was totally delicious and very cool to get random chocolate (thanks Teresa!).

Fast forward about another 12 hours and I'm stopped at a rest area because my bladder can't handle the amount of Monsters I've drank, and I find a colorful leather bracelet sitting by the sink. My first inclination was to find who it belonged to because it was small, possibly a child's. So I took it outside, looked around and there were no children in the rest area. I put it back thinking someone would be back for it and then started thinking, someones probably going to come in and just toss it, and I bet my daughter would like this and the owner probably isn't going to come all the way back for it before it gets chucked.

During that 48 hours I also hit one lane construction just as they were letting my side through, saw a couple of coyotes, got a brisket sandwich and chips from another one of my co-workers (Thanks Jeff!),  got a call that payroll had finally corrected the amount they were deducting for health insurance, and just had a really great couple of days.

So to conclude, whether there's a field I jacked into or whether I just noticed good things because I was looking for them, it doesn't really matter, the experiment worked. I had a lot of fun and am looking forward to trying more of the experiments.

Oh, and by the way, I told my 7 year old about it, so she gave it a shot. This morning one of our neighbors brought us a giant box of walnuts and the first thing my daughter said was. "The universe brought me walnuts, do I like walnuts?" Turns out she does!
Posted by Emily Pearce at 7:51 PM No comments: